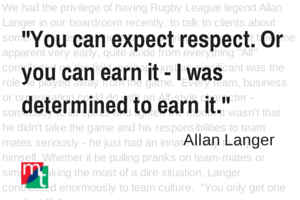 We had the privilege of having Rugby League legend Allan Langer in our boardroom recently, to talk to clients about some of the lessons he learned playing elite sport.

It became apparent very early, quite aside from everything “Alf” contributed on the field, that perhaps just as significant was the role he played away from the game.

Every team, business or organisation could do with an Alf-style character – somebody to lift spirits and lighten the mood.

It wasn’t that he didn’t take the game and his responsibilities to team-mates seriously – he just had an innate ability to enjoy himself. Whether it be pulling pranks on team-mates, or simply making the most of a dire situation, Langer contributed enormously to team culture.

“You only get one crack at life – you might as well enjoy it as much as you can,” he said. “If you don’t like what you’re doing, quit, and try something different.“

The other aspect of his career – which I never fully appreciated – was the torrid initiation he faced when he first arrived on the representative scene.

Most people in and around the Queensland State of Origin team – including the coaches and a good number of the players – thought Langer was far too small to play Rugby League at the highest level. But he had a couple of powerful supporters, who ultimately provided him with the window of opportunity.

“Initially, It was daunting,” he said. “But I made up my mind that I was going to prove them wrong. I took it as a challenge. You can expect respect. Or you can earn it – I was determined to earn it.”

History shows that he did earn respect – and quickly. He maintained it throughout his decorated career, both for his on-field brilliance and his less formal status as his team’s “entertainment director”.

It’s a good reminder to us all – moods are often contagious. In that sense we have a responsibility to those around us to focus on the positives, and go looking for fun.