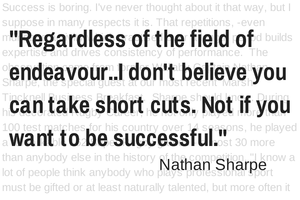 I’ve never thought about it that way, but I suppose in many respects it is. That repetitious – even mundane – activity which, practised over a lengthy period, builds expertise and drives consistency of performance.

The observation came from former Wallaby captain Nathan Sharpe, the special guest at our most recent “Marsh Tincknell Business Breakfast.”

Sharpe should know.  During his decorated Rugby career, he not only played more than 100 Test matches for his country, over 14 seasons, he played a remarkable 162 Super Rugby games – almost 30 more than anybody else in the history of the competition.

“Regardless of the field of endeavour, whether it’s Rugby, business or just some recreational pursuit, I don’t believe you can take short cuts.  Not if you want to be successful,” Sharpe said.

“I know a lot of people think anybody who plays professional sport must be gifted or at least naturally talented, but more often it boils down to the tedious repetition of practising and practising until the skill becomes second nature. And there’s nothing glamorous about that. It’s boring.”

Among the many other astute insights and sound pieces of advice Sharpe offered: